The Walkington Award commemorates the service of the late Doctor Al Walkington, Foundation Director of the Karratha College (now Pilbara Institute). The aim of the award, currently valued at $5,000 is to encourage students to continue either full-time or part-time studies at a recognised educational institution.

Each year the Walkington Award is awarded to a student whom the Award Committee considers to have achieved academic excellence over the previous 12 months while demonstrating achievement in other areas such as community involvement. The award is open to Year 12 students studying a full ATAR program at a local City of Karratha high school. 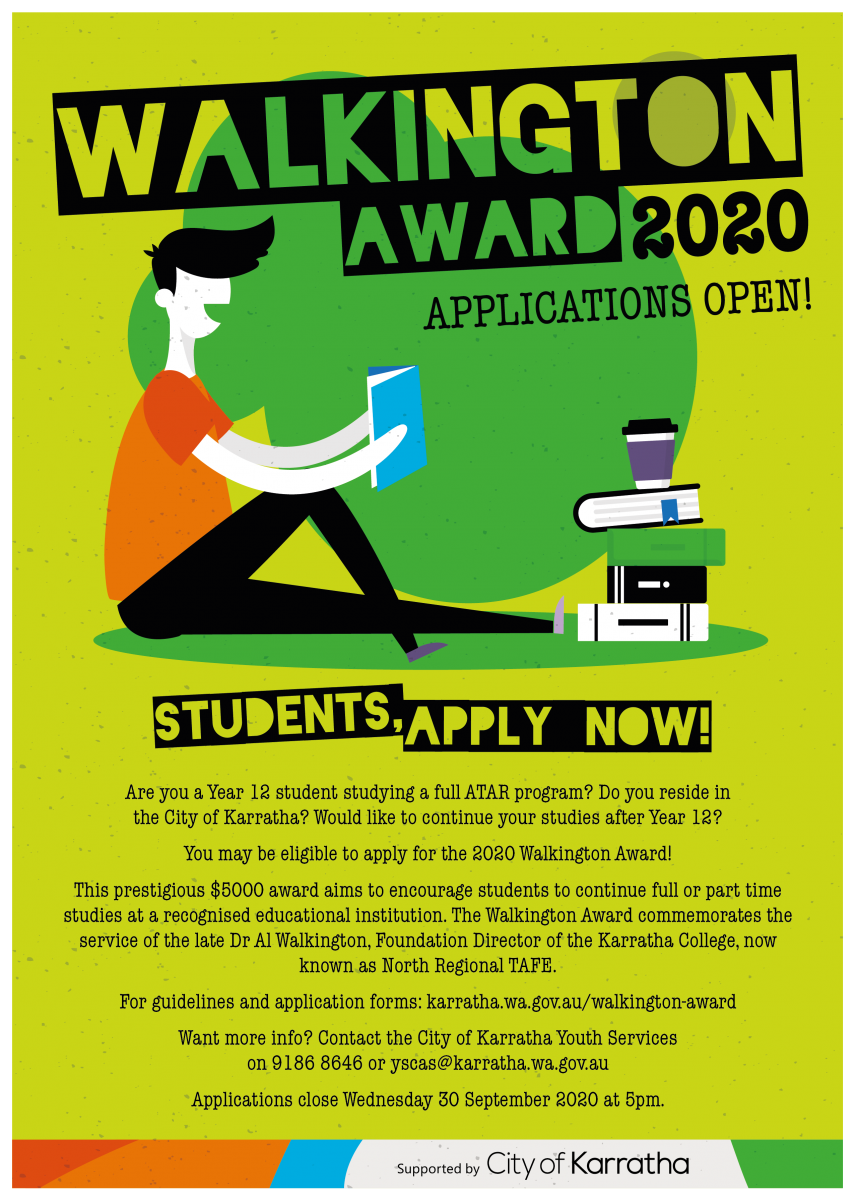 If you have any questions or would like assistance with your application, please contact Coordinator Youth Services Chrystal Ashby via 0430 591 632 or email chrystal.ashby@karratha.wa.gov.au

St Luke's College Year 12 student Mackenzie King received the prestigious 2019 Walkington Award. The award caps off a big year for Mackenzie, who was St Luke's College 2019 Dux Award recipient and Sports Captain, and Wickham's Junior Citizen of the Year. In addition to being a high achiever across her studies, Mackenzie has generously donated countless hours of her free time to her local community through volunteering with the Wickham Wolves Football Club, Wickham Netball Association, Wickham Wanderers Soccer Club and the Port Walcott Yacht Club and Surf Life Sailing Club.

Mackenzie wishes to pursue a Bachelor Degree in Physiotherapy and a Secondary Teaching degree in Perth after completing her Certificate IV in Allied Health Assistant (Physiotherapy).

St Luke’s College student Richard Shaw received the prestigious 2018 Walkington Award. Richard has demonstrated exceptional leadership skills, academic excellence and dedication to giving back to his community. A hard-working and thoughtful student, Richard was recognised as a high achiever across academics, sport and generous community services at an awards ceremony. Richard volunteers considerable time mentoring younger students at school and through soccer.

Richard wishes to pursue a double degree in law and commerce in the United States and Australia. His ultimate vision is to start a law firm with his sister who is currently studying at Curtin University.

Karratha Senior High School student Liam Payne has been awarded the 2017 Walkington Award. Liam has demonstrated an exceptional work ethic and is a hardworking and respectful student, awarded ATAR Dux of KSHS this year. Liam is a dedicated member of the community, providing countless hours of service to The Varity Charity through the Variety WA Bash and St Johns Ambulance. Recognised as a leader among his peers, Liam has represented his school community at a number of State-wide initiatives including the Pilbara Legislative Assembly and participated in The Leeuwin II Ocean Adventure on a full scholarship.

Liam wishes to pursue a Bachelor of Biomedicine before attaining a post graduate degree as a Doctor of Medicine at the University of Western Australia.

St Luke's College student Sophie Sparks has been awarded the 2016 Walkington Award in recognition of her outstanding contribution to her studies and community. Her academic success in science, maths and english combined with her leadership and community service make Sophie and inspiring young woman, committed to achieving her goals and giving back to those who have helped her along the way.

Sophie believes 'we should never stop learning because life never stops teaching' and plans to attend Curtin University in Perth where she will study medicine.

St. Luke's College student Anshula Ashish has been awarded the 2015 Walkington Award thanks to her fantastic scholastic achievements and dedication to our community. Anshula has excelled academically right throughout her schooling life and contributed to our community through voluntary work, sport, art and leadership roles.

Passionate in science and the arts Anshula has set herself an incredible career path, backed by a strong academic foundation and the leadership and personal qualities that will see she achieves this.

Anshula plans to attend the University of Western Australia as an assured applicant for Postgraduate Medicine. If granted this assured spot she plans to study a Bachelor of Science and become a Doctor of Medicine. She hopes to gain some experience through a mid-term trip to India or Africa where she will volunteer at hospitals before returning to the Pilbara to work in local hospitals and communities.

St. Luke's College Head Boy Wayne Zaccheus has won the highly prestigious Walkington Award valued at $5000 for 2014 thanks to his outstanding academic achievement and commitment to the local community.

Wayne Zaccheus is fascinated with the world's technological advancements, enjoying science and mathematics since he was young. His dedication to these subjects and his studies on the whole have been evident throughout his education with numerous awards and acheivements to speak of.

Wayne is an outstanding young member of our community, a leader among his peers and a role model in all aspects of his academic and wider community life. He was the winner of the Rio Tinto and Scitech sponsored Beijing Bound Science Competition in regional WA and recieved a silver medal for research at the Beijing Youth Science Creation Competition in 2014. He participated in the inaugural Pilbara Regional Student Parliament and was a finalist in the Regional Solar Model Car Challenge for three years in a row - just to name a few achievements.

For more information, please contact Chrystal Ashby on (08) 9186 8646 or chrystal.ashby@karratha.wa.gov.au