JETGO Australia will provide direct flights between Karratha and Brisbane from the 25th June subject to final regulatory approval.

Tickets will be available online from www.jetgo.com from Thursday 5th April.

“JETGO currently operates the smaller Embraer ERJ135, ERJ140 and ERJ145 jets with 37, 44 and 50 seats. This service will see Jetgo introduce the larger 98 seat Embraer E190 to its fleet along with Business Class,” Mr Bredereck said.

“The larger E190, whilst new to JETGO Australia’s fleet, has previously been operated in Australia by Virgin Australia and Cobham, and is very popular in the region.”

The new services are being established with support from the City of Karratha.

City of Karratha Mayor Peter Long said expanding services from Karratha Airport had been a top priority for Council.

“We consistently receive feedback from the community that they want more flight options from Karratha and we have been working hard to attract additional services,” Cr Long said.

“We are delighted at the introduction of Brisbane flights, opening up new opportunities for inbound travel to the City of Karratha and direct access to the East Coast and international connections from Brisbane Airport,” Cr Long said.

“JETGO Australia is planning to introduce flights between Karratha and Singapore from late September, however considerably more work is required before these flights can commence,” he added. 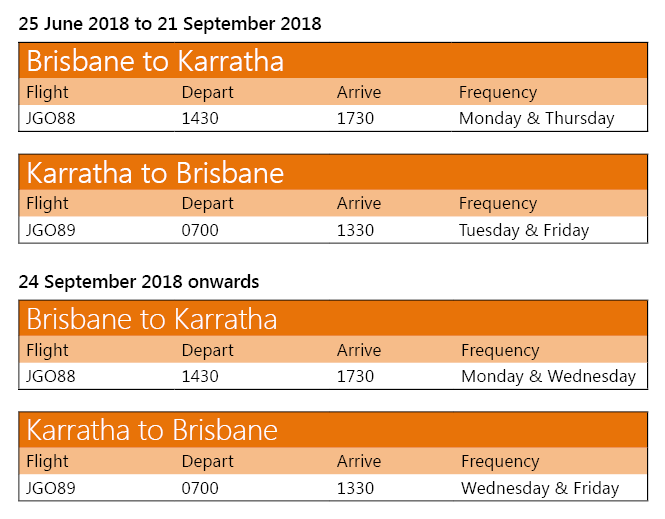 Tickets will be available online from www.jetgo.com from Thursday 5th April.

About:
JETGO is a privately owned all jet regional airline based in Brisbane, currently operating five Embraer Regional jets on fourteen routes in Eastern Australia. JETGO holds one of only fourteen high capacity Australian air operator’s certificates and is approved by CASA for worldwide operations. JETGO has previously operated charter services to and from Singapore.

Embraer is the leading manufacturer of commercial jets up to 150 seats. Since entering revenue service in 2004, the E-Jet family, of which the E190 is part of, has received more than 1,800 orders and delivered 1,400 aircraft. Today, E-Jets are flying in the fleet of 70 customers in 50 countries and offer comfortable 2+2 seating and market leading baggage capacity.